The company’s focus has turned to leasing the fourth and final phase of San Francisco’s largest multifamily residential project in nearly a century.

Trinity Place, the $1 billion plus mixed-use multi-family development, has been under construction for the past 15 years. Projects like this take time—lots of it—especially in the City by the Bay, and the finishing touches of this one might still be in progress if not for Dave Tompkins pushing things forward. 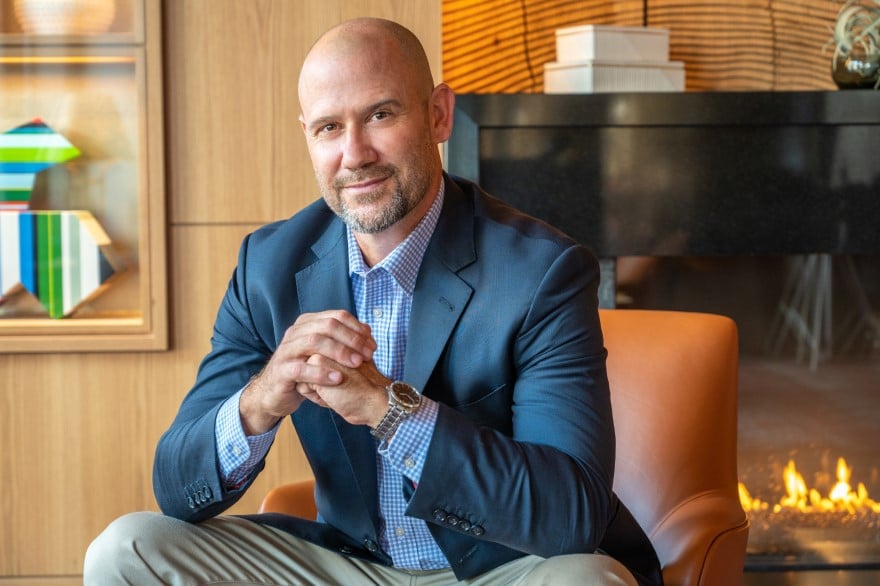 Director of Facilities at San Francisco-headquartered Trinity for the past 10 years, Tompkins stepped into the role with the first high-rise complete and excavation having begun on the second of four phases. The second and third buildings opened in 2013 and 2017 respectively. The fourth not yet even in the blueprint stage at the time of his arrival, it was completed this past summer with the first residents moving in on July 16. Given that the other three buildings were quickly occupied, Tompkins has reason to believe this one will be as well.

“A huge milestone for us,” he tells Blueprint a few days afterward. “The culmination of 44 years of planning and development, and I’m proud to have been a part of successfully shepherding and on-boarding much of this project.”

Each is unique. The four buildings range from 19 to 24 stories and bring nearly 2,000 apartments, as well as commercial space to what’s known as San Francisco’s Mid-Market neighborhood. Dwellers have access to a parking facility six stories underground that, after extensive waterproofing, further solidifies the foundation. 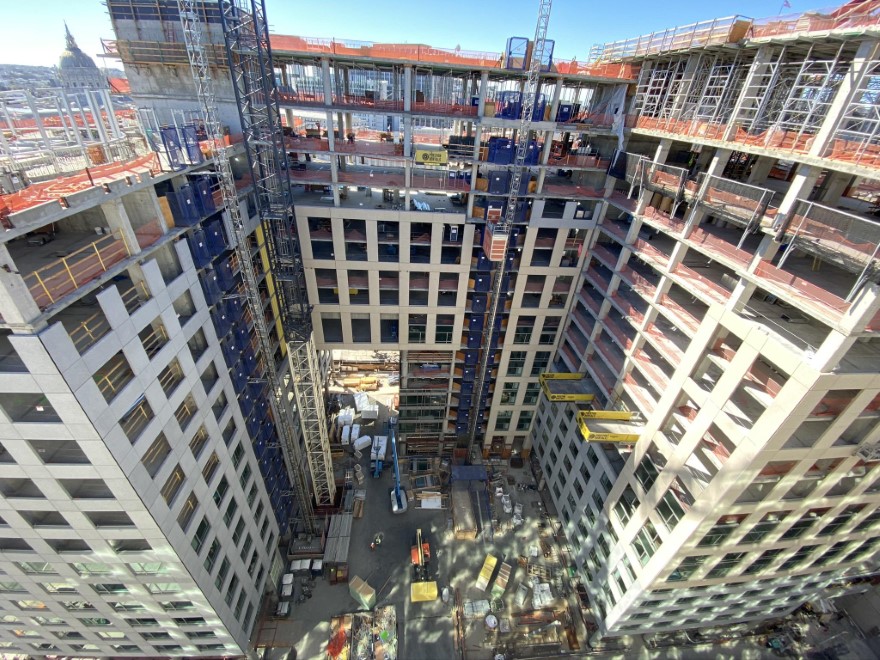 Among other features, there are four fitness centers, 30 elevators, a 92-foot-tall statue and a nearly 2-acre open space courtyard. Three subterranean floors also will be home to the area’s largest grocery store, a 55,000-square-foot Whole Foods Market—the grocer’s flagship location in San Francisco and one of the most complex designs it has in the United States.

All buildings have been integrated into a cohesive master plan that Tompkins deems one of the most challenging aspects of making Trinity Place compatible to a greater community and satisfying a slew of local rules and regulations to boot.

“It took a lot of creative thinking and some changes in the construction process,” he says. “This many units on one large parcel in a high-density area—it makes it all the more complicated.”

All those apartments generate a lot of trash each day and the city expects a developer to spare it headaches. Tompkins helped coordinate a solution to assemble a central trash plant in a landing area that should be capable of compacting refuse from the four buildings for the next century.

San Francisco’s building codes always changing, the fourth building was subject to rules that weren’t in place for the previous three. The city, now a stickler for ventilation, required that each bedroom in the new building be assured fresh air whereas the third phase only required an exhaust fan. The first two phases had to meet no such criteria. 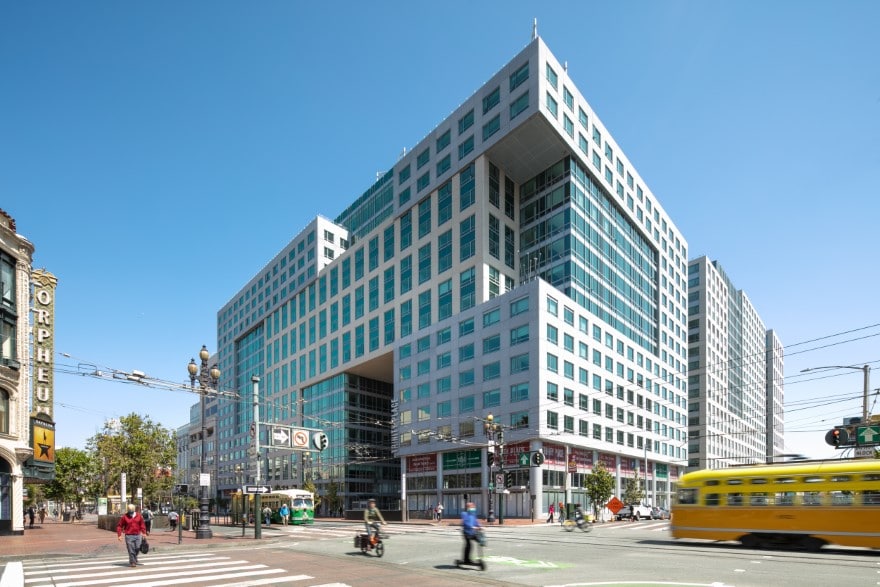 “Every new building has a newer and more modern code compliant system that didn’t exist before,” he explains. “These are mostly on the mechanical side and increase the complexity of each project from construction to maintenance and operation.”

With those matters met and the company focusing on leasing, Tompkins can concentrate on his many other responsibilities of facility management. And not just at Trinity Place, his employer having around 3,500 units in 30 buildings, all within San Francisco’s 49 square miles.

That’s a lot of maintenance that he must oversee as well as procurement, budget planning and capital management. Security a major concern in any urban environment, he has over 1,300 camera views accessible in a central Security Operations Center. 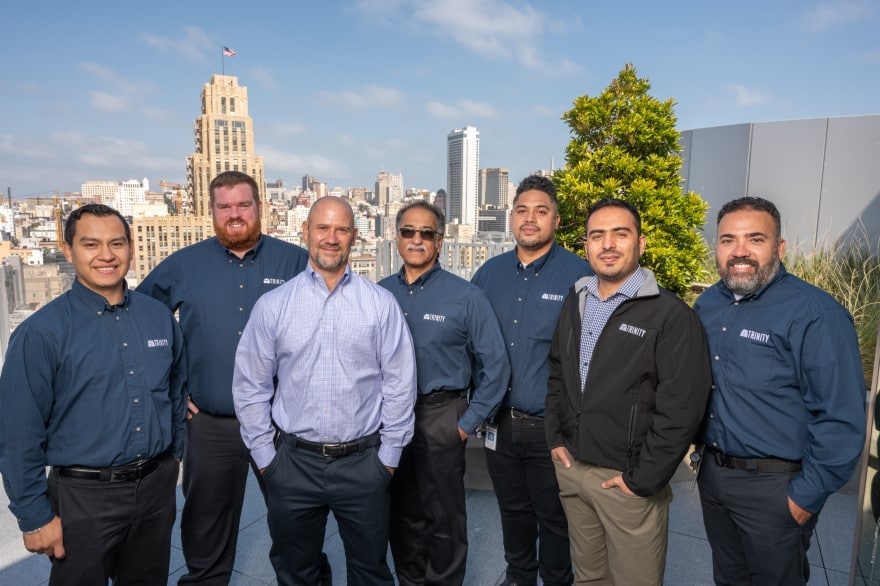 A one-man facilities team in 2012, Tompkins now runs a department of 12. He has multiple facility managers, oversees the warehouse and logistics/procurement, a team of carpenters and all the company’s security systems. On the building systems side he has a chief engineer at Trinity Place who helps to ensure that all of the complex systems that are now in place are working correctly. In addition, he is part of the company’s executive leadership team and helps to oversee many of their key initiatives throughout the organization.

“No one can do this job alone and everyone on the team has helped contribute to our success,” he says. “When recruiting, I always look for the raw skills which I think are most important—a good work ethic, honesty and those that take ownership of what they’re doing.”

Time was when Tompkins’ career seemed destined down a different path, perhaps as a writer or professor. Born in the Bay Area, he majored in English at the University of Arizona, but realized more fulfillment from working outdoors and seeing the tangible results of his labor. He literally learned construction from the ground up and has put his formal education to use through effective verbal and written communication over his 20 year-plus career in construction and facility management.

By the time he came to Trinity, Tompkins was well-versed in all matters of the building process, having owned a small construction business, working as a carpenter and transitioning into management. There was still some baptism by fire though, as he recalls how he inherited a portfolio of nearly 50 buildings, many suffering from decades of deferred maintenance. 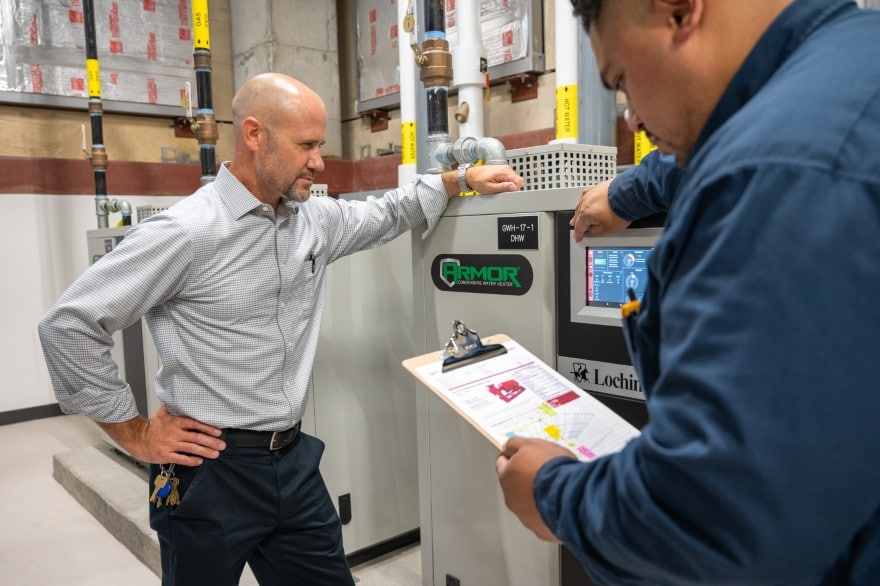 “One of my greatest achievements at Trinity has been getting these buildings back on line—new windows, elevators, roofs, boilers—while managing new construction and building the great team that’s in place now,” he says.

So it’s been a productive decade, with Phase 4 of Trinity Place the latest addition to the multibillion dollar residential portfolio he oversees.

It’s all the more remarkable, he says, that the last building could be finished on schedule despite COVID-19 safety protocols and the logistics of working in such a densely populated area. As to whether Trinity envisions other such projects, Tompkins can’t say, but he’ll keep busy maintaining what’s in place.