Although attractions like Alcatraz, The Golden Gate Bridge, and Lombard Street draw large crowds daily, multiple magnificent statues are scattered across each SF neighborhood.  Despite this plethora of wonderful San Francisco statues, locating each of these hidden gems can be a challenge. Let’s take a closer look at where to find some of the most notable statues in The City by the Bay. 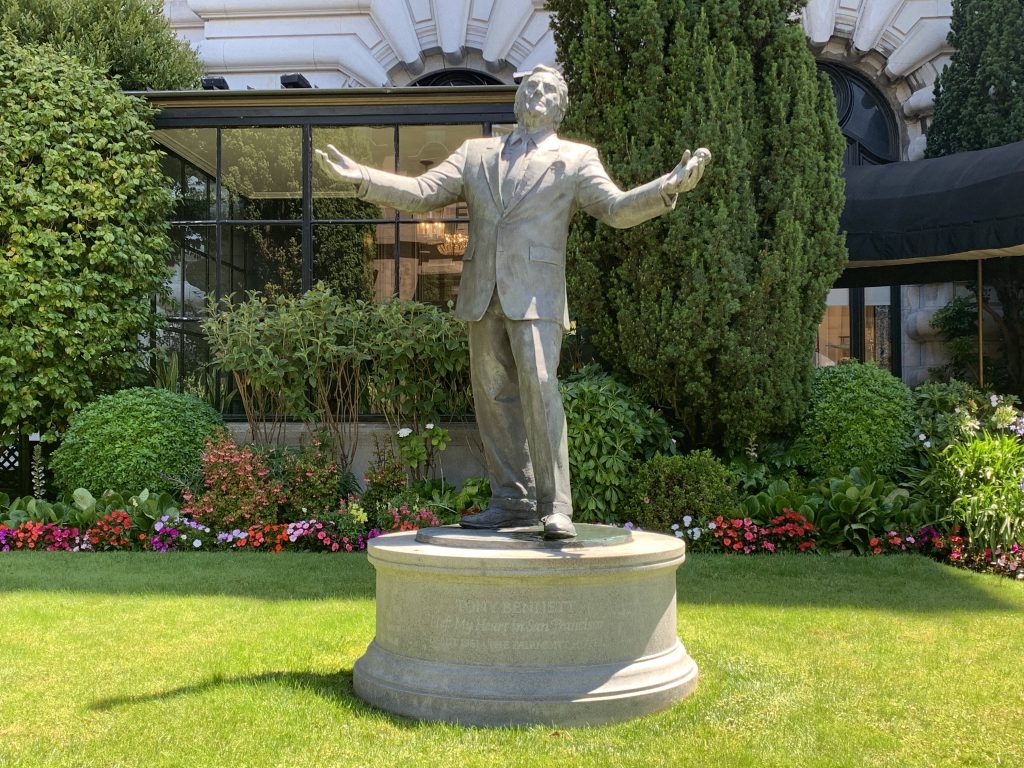 Tony Bennett’s love for San Francisco was forever set in stone when the city gifted him with a statue for his 90th birthday. Bennett’s music continues to inspire many to find love in San Francisco. You can find him singing his heart out outside The Fairmont Hotel atop Nob Hill. 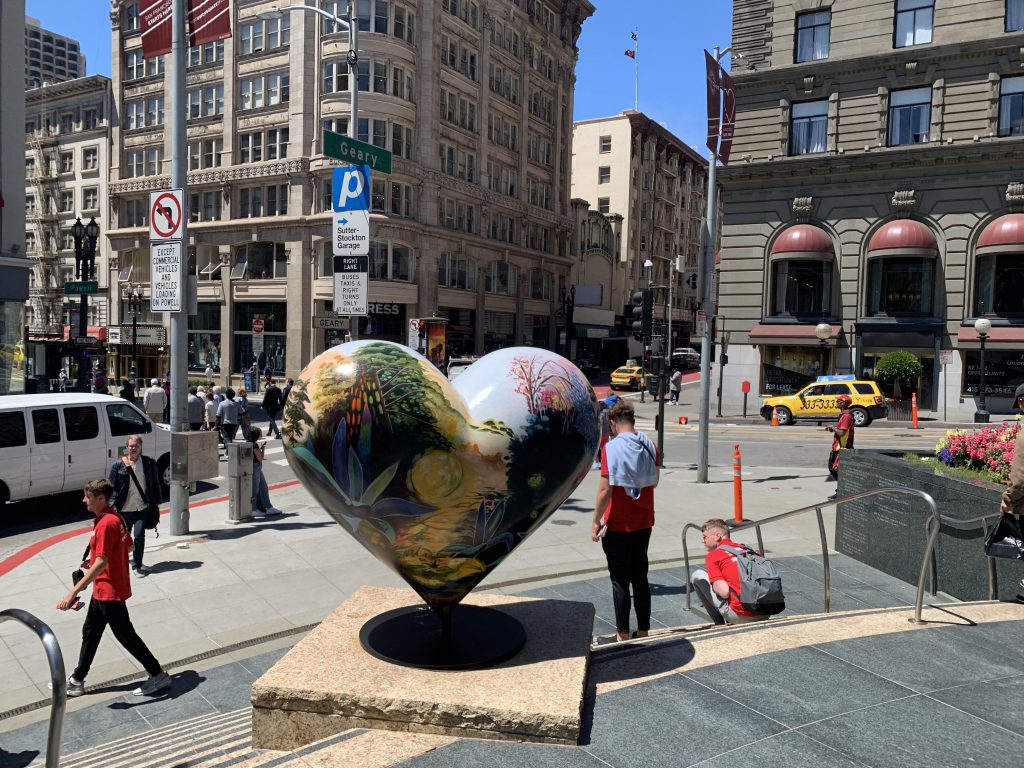 One of the most recognizable public art exhibits in San Francisco are the painted hearts scattered around the city. While some are located at popular attractions such as Union Square, Pier 39, and Oracle Park, others take a little more searching! These hearts are a nod to Tony Bennett’s classic hit, “I left my heart in San Francisco.” 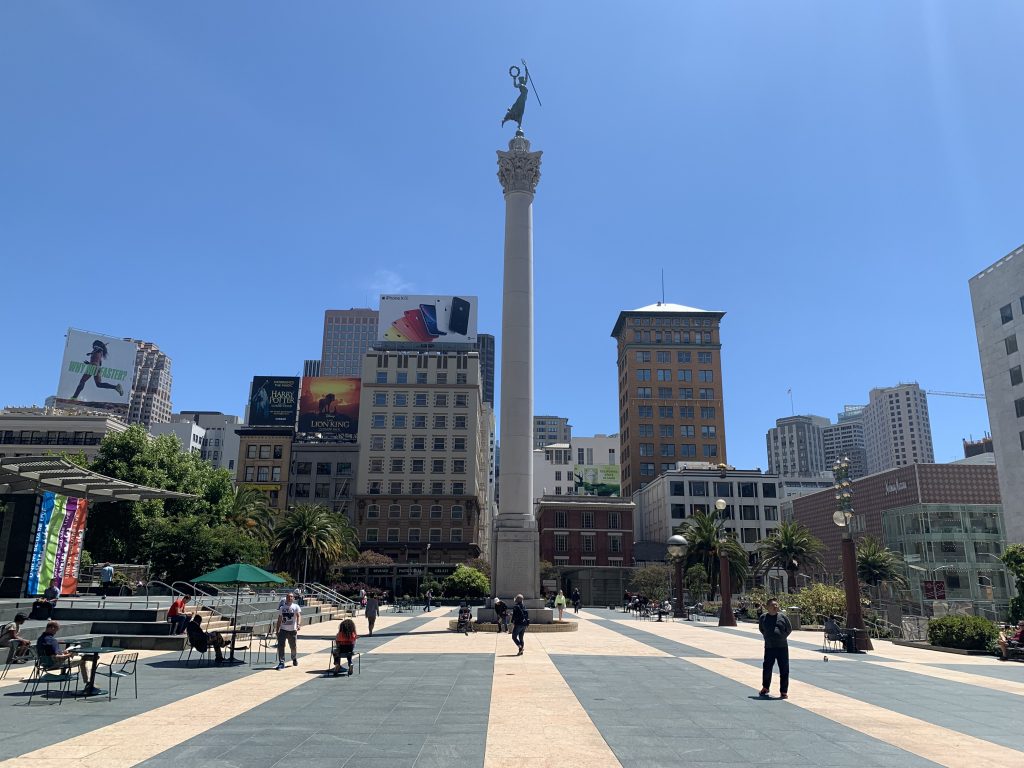 Just a few feet from the heart sculpture in Union Square is the towering 85 foot Dewey Monument. Despite its impressive height, it is not quite the tallest in San Francisco… 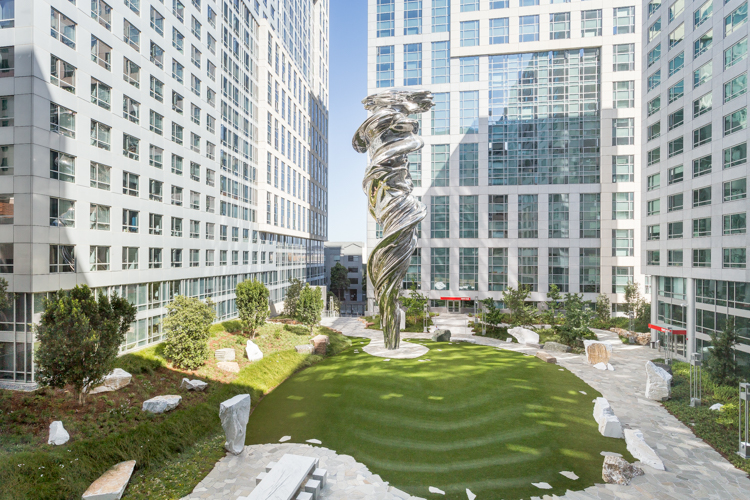 San Francisco’s tallest statue is located in the stunning Piazza Angelo between Market and Mission on Eighth Street. This 92 foot Venus de Milo inspired masterpiece is surrounded by three residential communities that offer both furnished and unfurnished housing.

Breathtaking shot captures the sun rising over Willie McCovey’s statue outside @attparkofficial on the morning after his passing. Fans have placed flowers at the statue in remembrance of the #SFGiants legend. [?: @joshkeppel]

If you haven’t caught a ballgame at the home of the SF Giants, you are certainly missing out! Oracle park is one of the finest sports venues in the world with its fabulous amenities and waterfront location. There are four Giants Hall-of-Famer statues positioned outside the stadium: Juan Marichal, Gaylord Perry, Willie Mays, and Willie McCovey (pictured above). 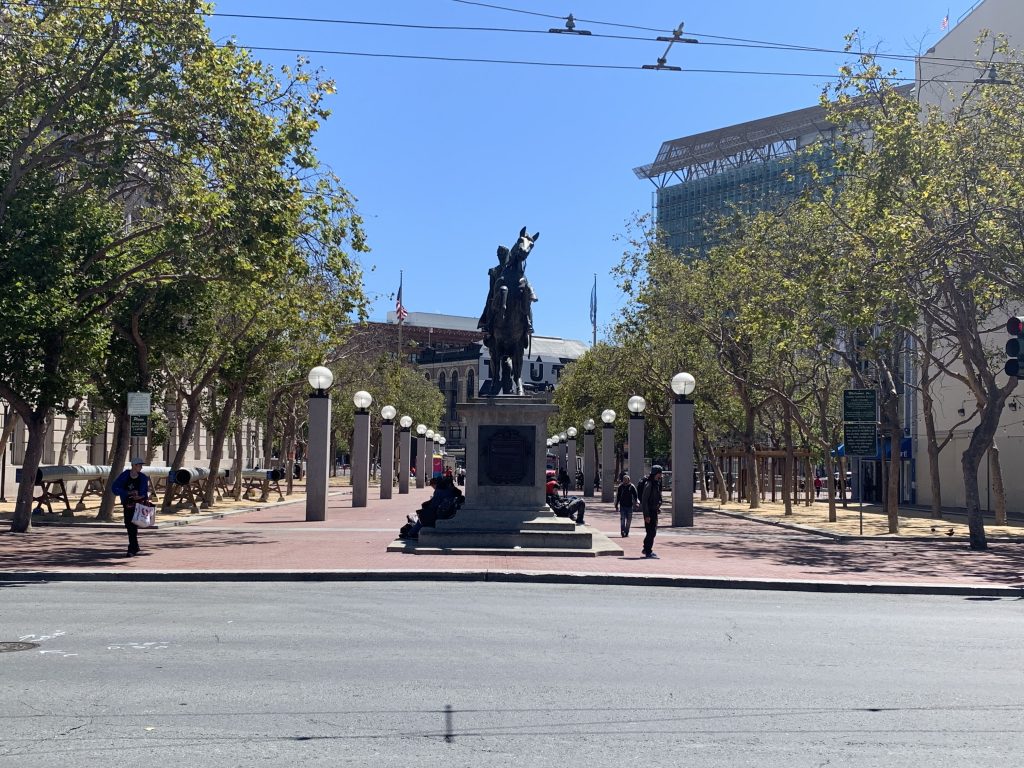 The Simon Bolivar Statue in the UN Plaza is one of three world-famous statues commemorating the Venezuelan leader. The other two were also built in the 19th century and are located in Caracas, Venezuela, and Lima, Peru. The Pioneer Monument was added to Fulton Street in 1894 to honor the California Gold Rush and the subsequent progress across San Francisco. 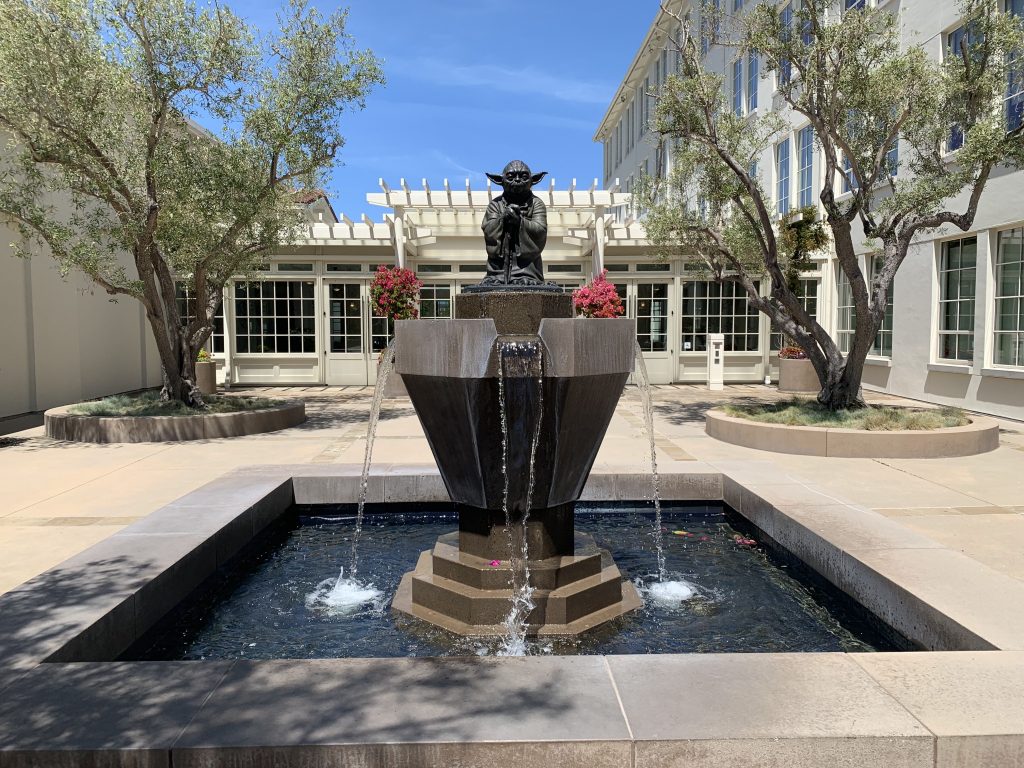 Right outside the entrance to George Lucas’ Lucasfilm headquarters is the beautiful Yoda fountain. This fountain and lobby behind it are a must-see for any Star Wars fan! 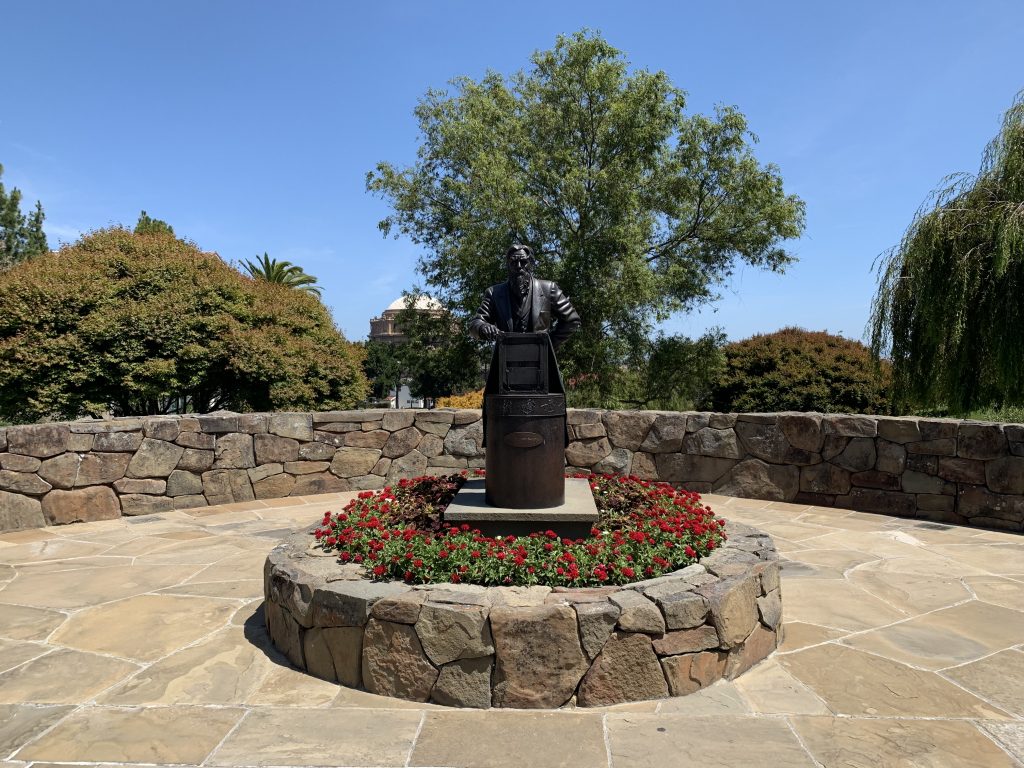 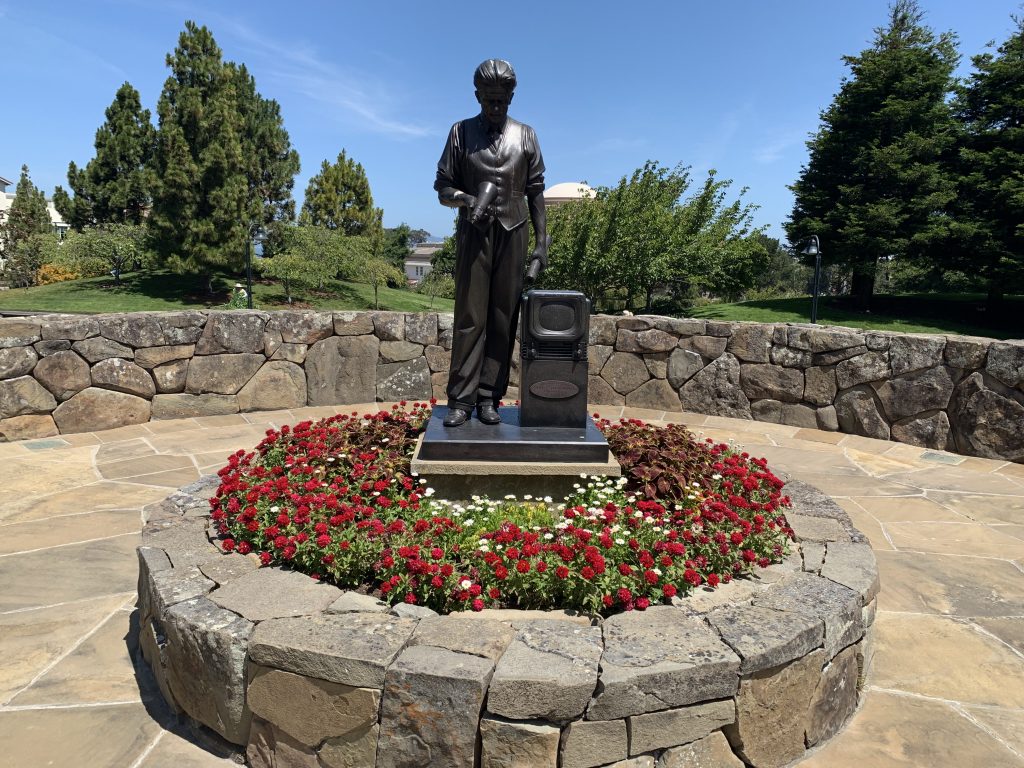 Just a short stroll from the famous Yoda Fountain are two statues commemorating a couple of the most influential digital art pioneers. Philo T. Farnsworth was the inventor of the modern television while Eadweard Muybridge built the first motion-picture projection. 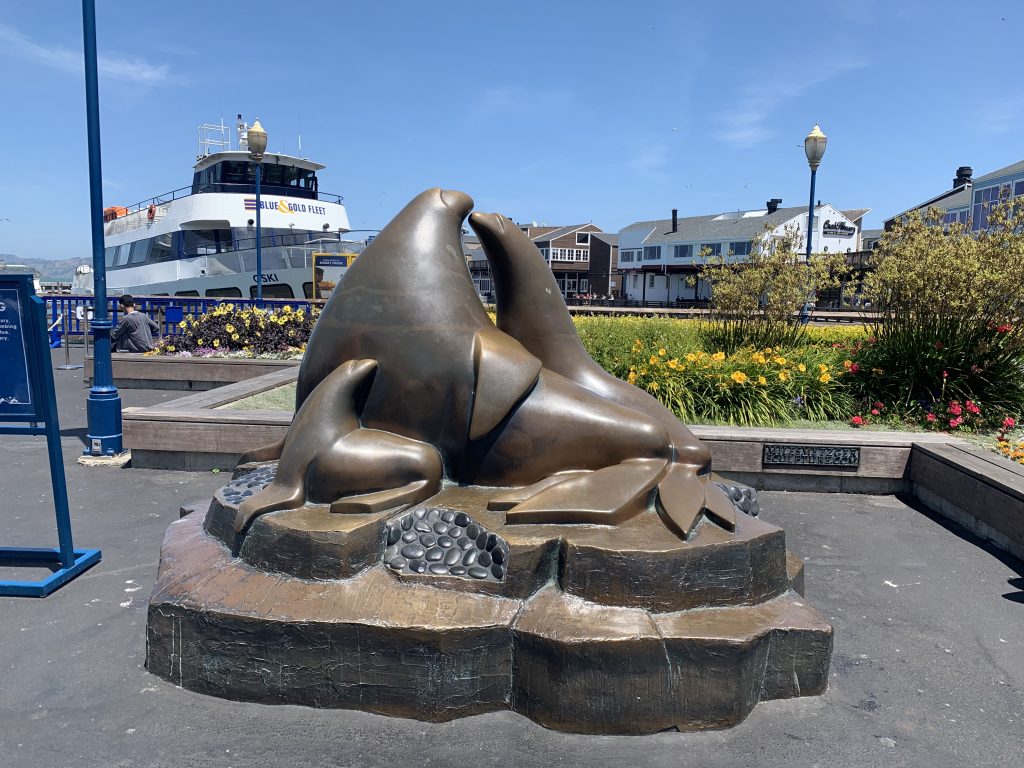 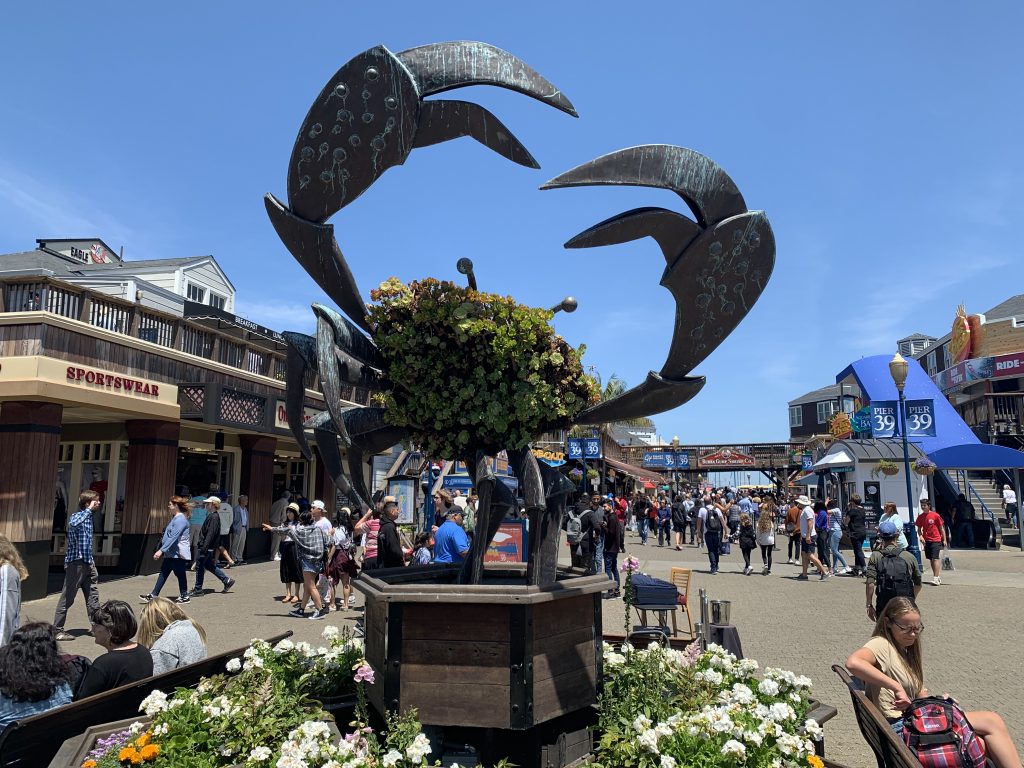 Taking an unobstructed photo at Pier 39 is undoubtedly a daunting task as both the Sea Lion and Crab statues are crowded daily. However, these two beautiful statues pay homage to the seal life that calls the San Francisco Bay home. 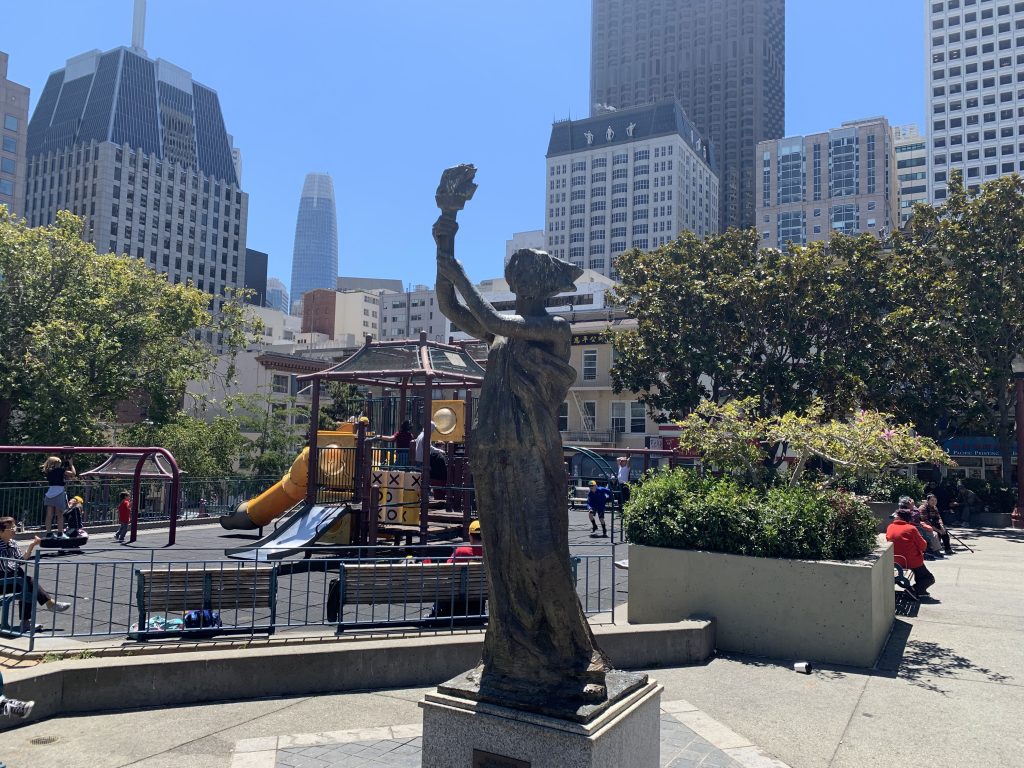 Although similar to the Statue of Liberty, the much smaller “Goddess of Democracy” was inspired by the 1989 protests in Tiananmen Square. Similar statues exist around the world in cities such as Hong Kong and Washington D.C. 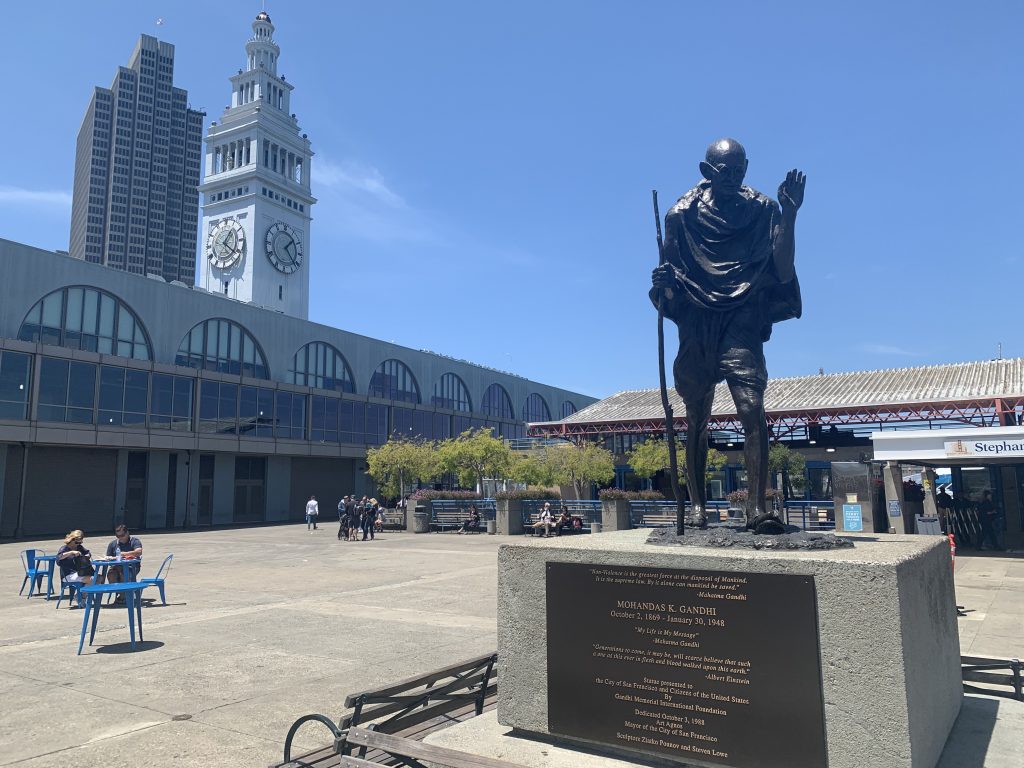 Former San Francisco mayor, Art Agnos, dedicated this Gandi statue to the city in 1988 as a gift from the Gandhi Memorial International Foundation. A renowned vegetarian, Gandhi’s statue is the site of a weekly farmer’s market in the ferry plaza. 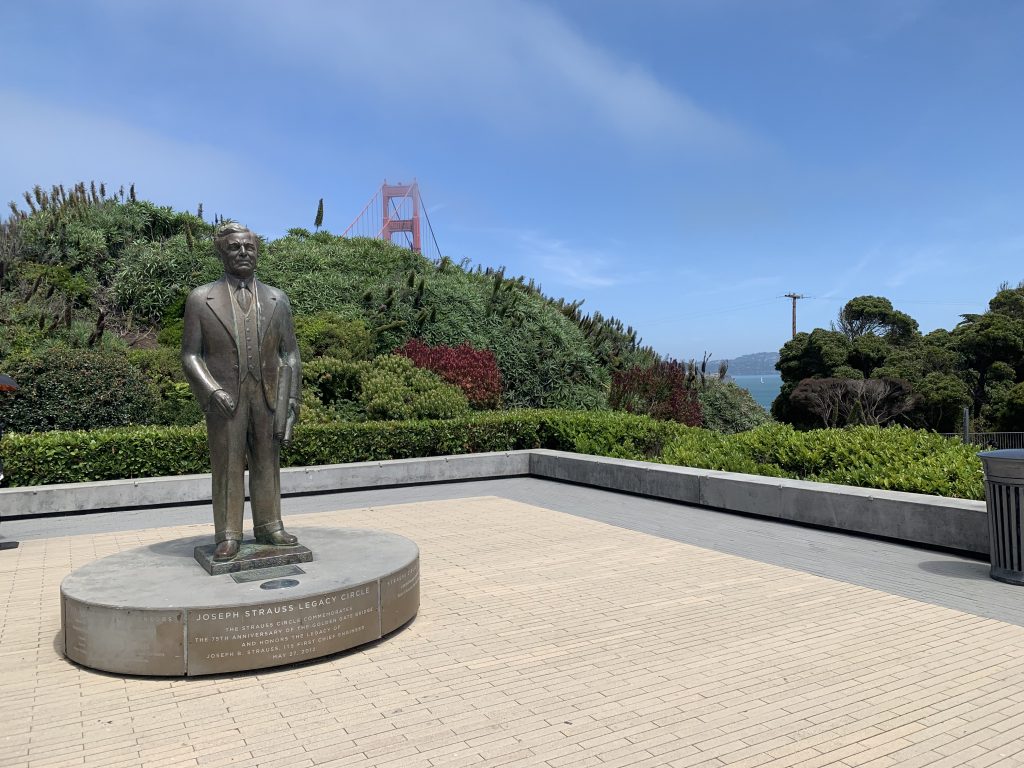 Joseph Strauss was the chief engineer of the world’s most famous bridge, the Golden Gate Bridge. Strauss now forever stands at the entrance to the bridge in The Presidio. 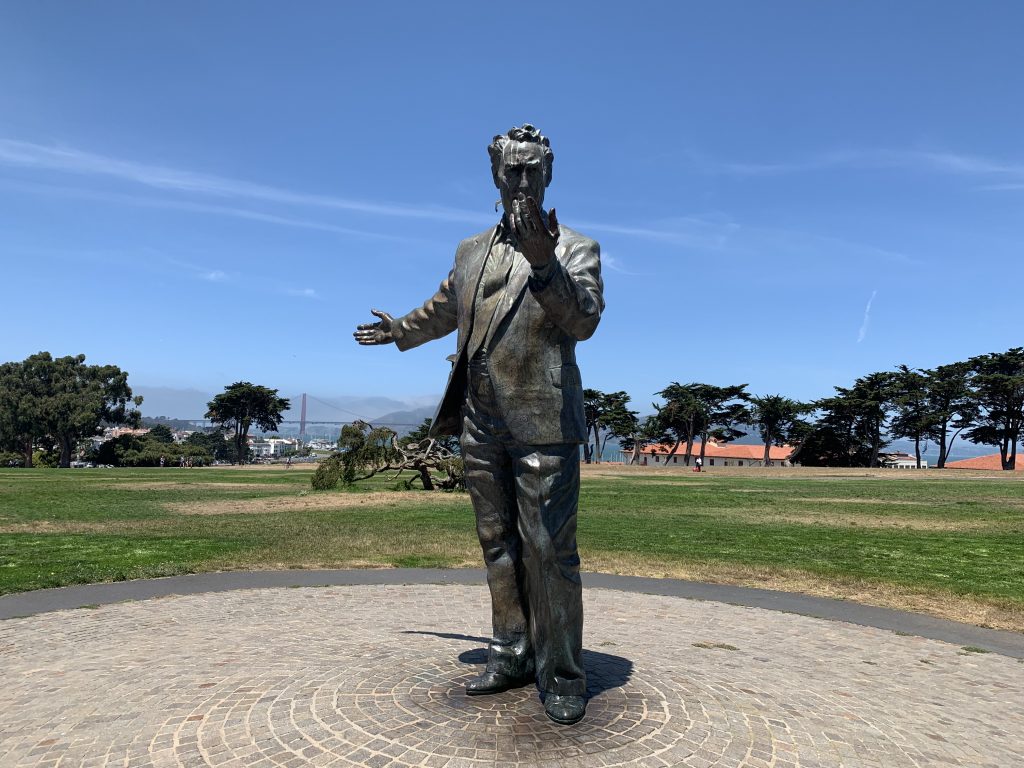 A true San Franciscan, Phillip Burton was an influential US Representative from California who was instrumental in creating the Golden Gate National Recreation Area and introduction of the AIDS bill. His statue can be found in the grassy “Great Meadow” of Fort Mason across from the Marina Cove Apartments. 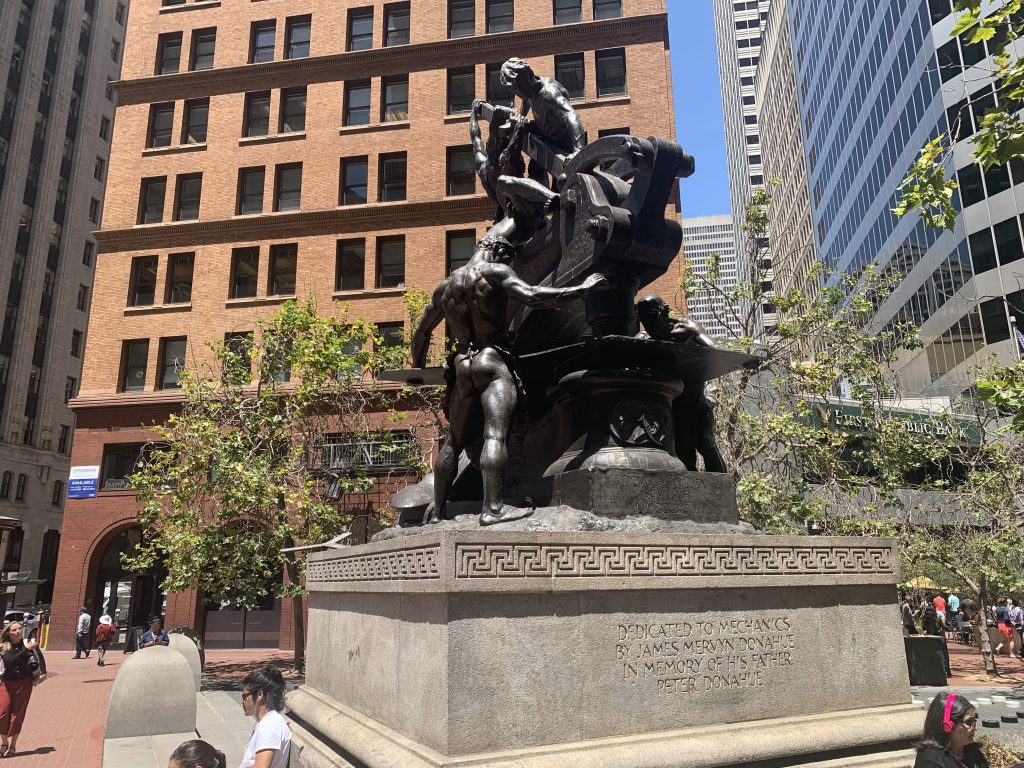 In the early 20th century, Bay Area sculptor Douglas Tilden was commissioned to build multiple bronze statues on San Francisco’s Market Street. One hundred years later, these statues continue to honor the men and women who built our city and ushered California into statehood.

A now-iconic piece of The Embarcadero, Cupid’s Span inspires more people every day to leave their hearts in San Francisco.