Grand openings have become a less familiar sight in recent times, making the development of Francisco Park all the more exciting. Positioned in San Francisco’s iconic Russian Hill neighborhood, this park is sure to bring joy for years to come! Learn all you need to know about this stunning SF development, thanks to the Francisco Park Conservancy. 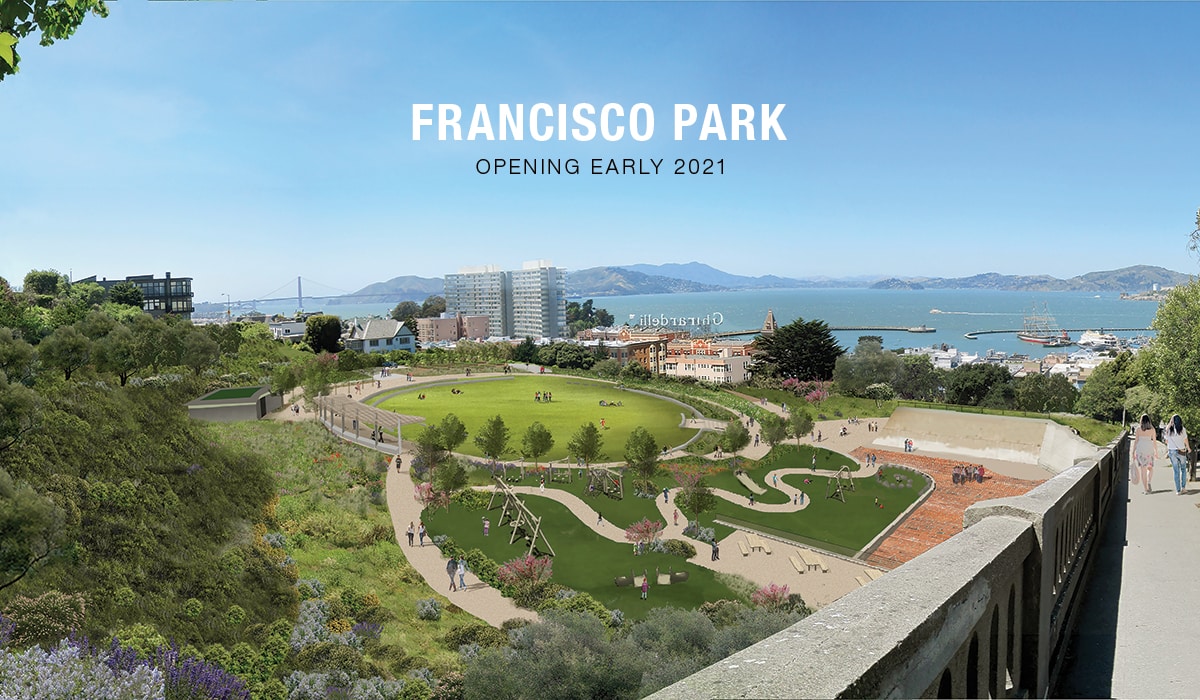 Just two blocks from the famed crooked section of Lombard Street between Ghiradelli Square and the luxurious 1000 Chestnut apartments, lies the site of San Francisco’s newest park. Located alongside the famous Hyde & Powell Street Cable Car line, Francisco Park will be easily accessible and a short walk from nearby shops, bars, and restaruants. Favorites in the area around Aquatic Park include San Francisco Brewing Company and The Buena Vista.

View the quick progress on #FranciscoPark from the windows of the 1000 Chestnut apartments! This exciting development is on pace to be completed in 2020! ⛵️?

The Francisco Park Conservancy certainly had everyone in mind when designing this lovely space, as there are a variety of options available to all! The entry lawn and plaza on Bay Street will connect to the already-in-place Russian Hill Park with a new dog run and scenic overlook. The central oval-shaped green in the center of the park will be surrounded by a picnic area, community garden, playground, and a reservoir interpretive area. The southern end of the park further up Russian Hill includes another entrance, overlooks, a habitat zone, and bathrooms.

It’s hard not to be excited about the fabulous Francisco Park coming to Russian Hill next door to the 1000 Chestnut apartments! ???

Known as one of San Francisco’s “seven original hills,” Russian Hill is celebrated for its stunning Bay Area views, exquisite architecture, and iconic landmarks. With cable cars passing left and right, the sights, sounds, and smells of Fisherman’s Wharf and Ghirardelli Square nearby, and glimpses of the Golden Gate and Alcatraz, it can’t get much more “San Francisco.” A harmonious mixture of longtime locals, new San Franciscans, and travelers, Russian Hill will greatly appreciate new public space.

Make the move back to #SanFrancisco with fantastic deals available in The City’s best neighborhoods! ???

Constructed in 1859, the Russian Hill Reservoir was built shortly after the gold rush to supply fresh water from Mountain Lake in The Presidio to The City. At the time, this northern section of the city was rapidly gaining population due to its location near the original Port of San Francisco. The reservoir served the neighborhood until 1940 when it was replaced by the new Lombard Reservoir (covered by Sterling Park). Since then, the site changed hands multiple times, and many proposals for parks, housing, parking, and other developments never came to fruition until now.

Photo of the Francisco Street Reservoir in 1904 (it was the first large reservoir built in San Francisco in 1859 and decommissioned in 1940). In 2020, it will have a new life as Francisco Park!

While a late 2020 completion was expected initially, Francisco Park will open in early 2021. Construction for the project began in July of 2019 and will reach completion in the coming months despite virus-related delays. In these challenging and uncertain times, it is reassuring to know that new outdoor space is coming to our wonderful city for everyone to enjoy. As neighbors to the park at 1000 Chestnut, we at Trinity SF could not be more excited and encouraged by the work of Francisco Park Conservancy to make this happen!

It’s beginning to look a lot like Francisco Park!!! Keep an eye out for more developments to come in the next month! Be well. Be safe. Be kind. #franciscopark #franciscoparksf #franciscoparkconservancy #sfrecpark #getoutdoors