San Francisco’s iconic cable cars are back, and it sure feels good! One of SF’s most iconic features has been shut down for the past year and a half but reopened during August for full service. It is no secret that San Francisco just wasn’t the same without cable cars, nightlife, and festivals, but luckily all of these awesome attractions are here to stay in The City By The Bay! Take a look at our guide to riding SF cable cars and streetcars for fun, to commute for work, or back home to your beautiful apartment. 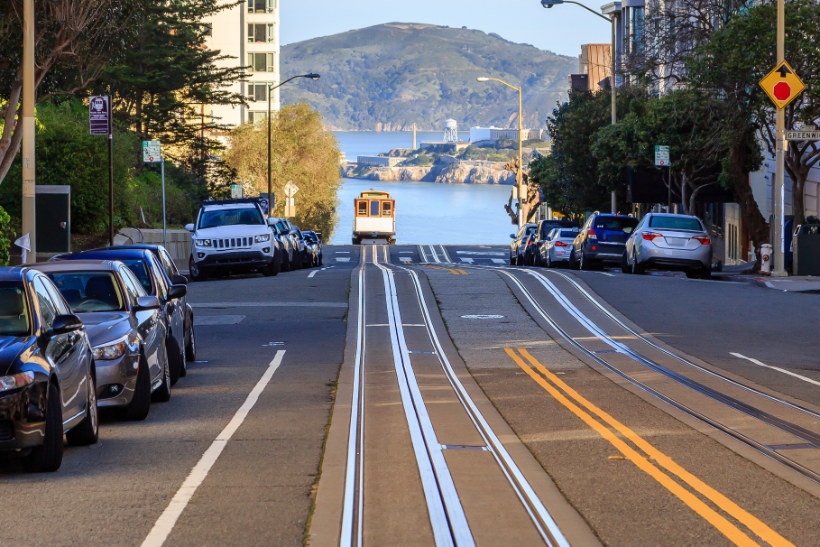 The Powell/Hyde line provides Alcatraz views while passing 1000 Chestnut on its way to Aquatic Park.

Likely the most scenic of the three cable car routes, the Powell/Hyde line travels from Powell & Market through Nob Hill and Russian Hill until finally ending next to the water at Hyde & Beach.  The line passes through Union Square and Chinatown before heading west down Jackson Street and then returning via Washington Street. Cable cars turn onto Hyde Street for the remainder of the journey north through Russian Hill, offering tremendous city and bay views of historic San Francisco locations such as Lombard Street and Alcatraz Island. Hop off and grab an ice cream cone at Swensen’s or ride the line all the way to the end and reward yourself with an Irish coffee from The Buena Vista. 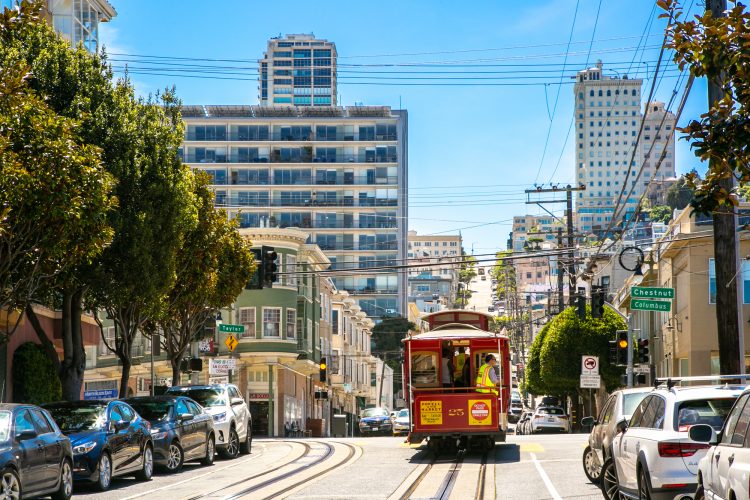 The Powell/Mason line passes Crystal Tower in North Beach on its way to Fisherman’s Wharf.

Also reaching its turnaround point at Powell & Market, the Powell/Mason line instead travels into North Beach straight down Mason Street. Next, the line briefly heads down Columbus Avenue before reaching its turnaround at Taylor & Bay. The route passes popular destinations such as Little Italy, Ina Coolbrith Park, and Washington Square while showcasing distinct San Francisco views of Coit Tower, The Transamerica Pyramid, and many other local landmarks. Grab a slice of pizza or stop for happy hour on your way downtown from Fisherman’s Wharf!

The Van Ness/California line braves the steep streets of SF from the Financial District to US-101.

Separate from the previous two cable car lines mentioned, the Van Ness/California line heads straight through the Financial District and Nob Hill. With turnaround points located at Market & California and Van Ness & California, this route travels up and down multiple sharp inclines with tremendous city and Bay Bridge views all around. Passing Huntington Park, Grace Cathedral, and the “Top of the Mark,” you’ll get a true sense of old San Francisco by riding the cable car down California Street. Stretching from Polk Gulch to Fidi, you’re bound to see the many diverse attractions The City has to offer on this one-of-a-kind ride. 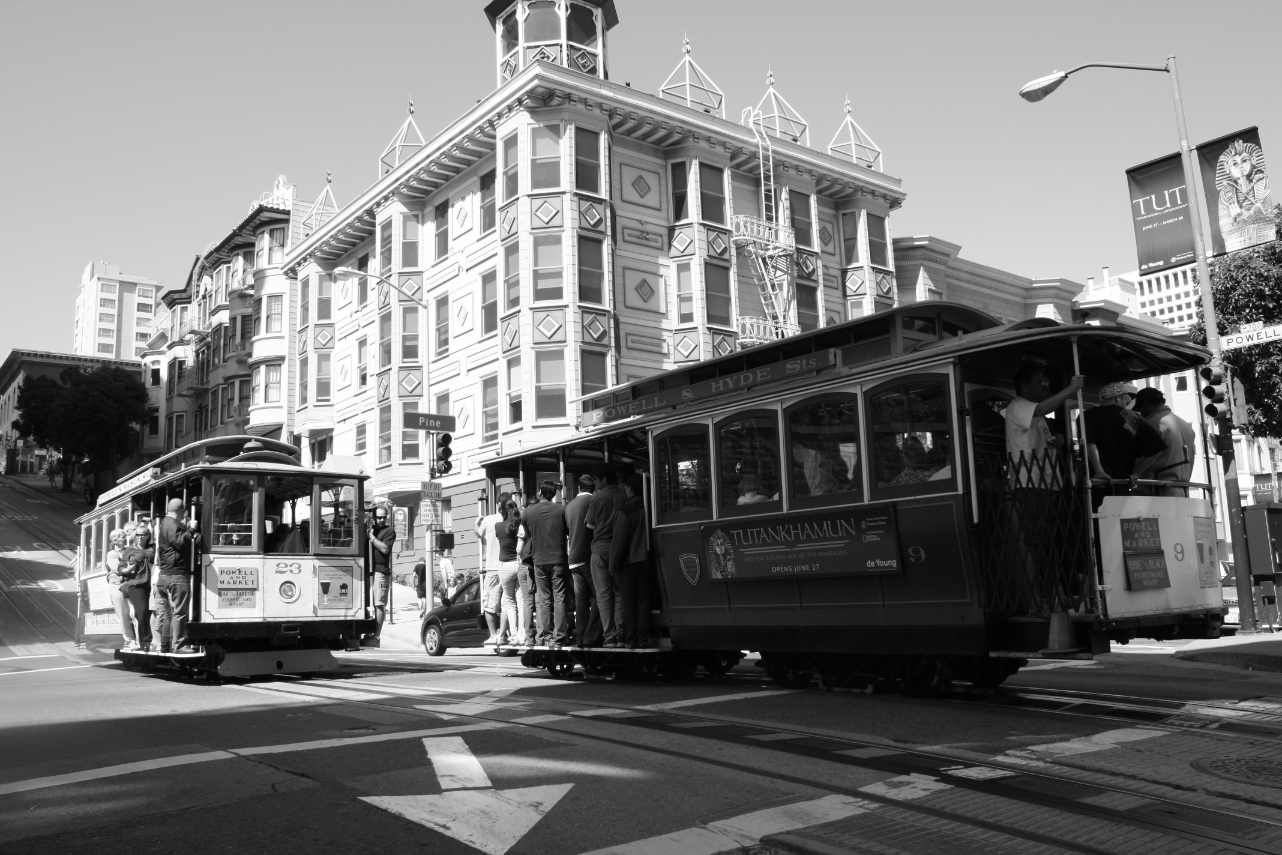 San Francisco’s cable car system was built in 1873 and is the last working system of its kind in the world.

Prior to the first cable cars in 1873, San Francisco operated horsecars that had quite the difficult time scaling the steep streets of The City. When the Clay Street Hill Railroad completed the construction of the first cable car system, it was a massive success, and it became evident that this was the future of public transit in San Francisco. Their popularity grew rapidly into the 20th century. Even the 1906 earthquake that ravaged much of The City couldn’t take down many of these sturdy cable car lines that could quickly traverse the hilly city. In the 40s, it was proposed to replace cable cars with MUNI busses, but the public pushback and understanding that tourists come to SF to ride the cable cars helped keep them in place. Today, they are one of two streetcar systems in the country with National Landmark Status. 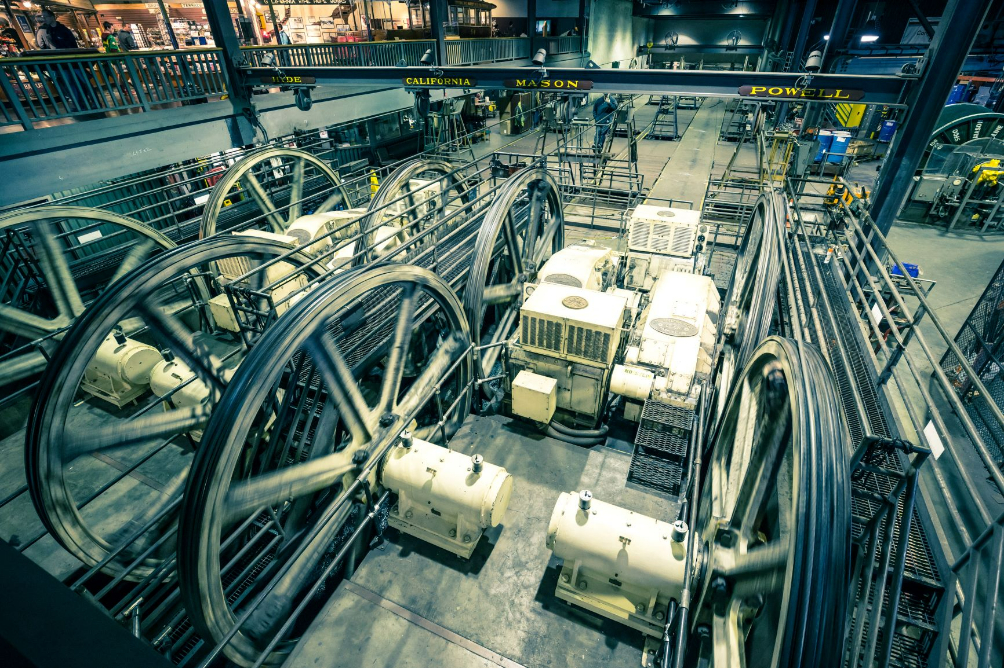 If you like visiting places chalked full of history with zero entry fee, this is the place for you! Hop on the Powell/Mason line and head to Nob Hill for a chance to look at historical exhibits, such as the only surviving car from the original Clay Street Hill Railroad. Also located at the museum, visitors can observe the complex that houses the cable car powerhouse moving the cars up and down the streets. You can purchase SF cable car souvenirs such as clothing, pins, bells, ornaments, and mini-models by visiting the museum’s gift shop. 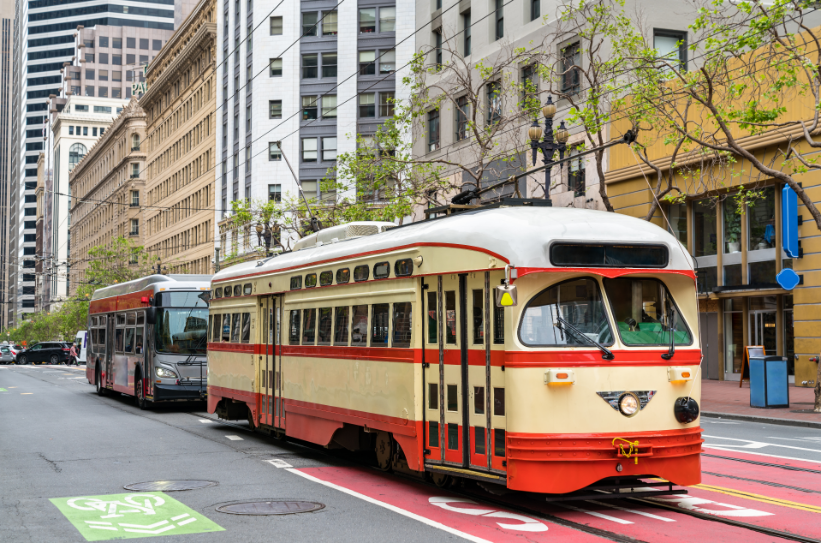 The historic Market Street F-Line heads past Trinity Place on its way to The Castro or The Embarcadero.

Streetcars differ from cable cars due to their overhead electrical wires that power the car down its tracks. In addition, the colorful streetcars are around the size of a MUNI bus, whereas cable cars are smaller and are propelled by steel cables beneath the pavement. While SFMTA operates multiple streetcar services, the most popular is certainly the F-Market & Wharves Streetcar. Although the F-Line is just 25 years old, the actual streetcars date back as early as 1915, with the first cars coming from Milan, Italy. As the line and fleet have grown, you can now ride historic streetcars that originally explored the streets of cities such as Osaka, Japan, Melbourne, Australia, Brooklyn, New York, and El Paso, Texas, to name a few. You can ride these cars now down Market Street from the Castro to the Embarcadero and then all the way to Pier 39.

Whether you prefer riding SF’s classic cable cars or restored streetcars from around the world, it’s time to once again hop aboard San Francisco’s convenient and unique rail systems!